Other changes came in the reign of Sneferu who, beginning with his first pyramid at Meidum , built pyramid complexes symmetrically along an east—west axis, with a valley temple on the banks of the Nile linked to a pyramid temple at the foot of the pyramid. Sneferu's immediate successors followed this pattern, but beginning in the late Old Kingdom, pyramid complexes combined different elements from the axial plan and from the rectangular plan of Djoser.

The flow of goods from these lands to the central government and its temples helped unify the kingdom. The pattern of a sanctuary lying behind a pillared hall frequently appears in Middle Kingdom temples, and sometimes these two elements are fronted by open courts, foreshadowing the standard temple layout used in later times.

Anthony Spalinger suggests that, as the influence of temples expanded, religious celebrations that had once been fully public were absorbed into the temples' increasingly important festival rituals. New Kingdom pharaohs ceased using pyramids as funerary monuments and placed their tombs a great distance from their mortuary temples. Without pyramids to build around, mortuary temples began using the same plan as those dedicated to the gods.

The complete temples of ancient Egypt

Traditional temples were neglected while new Aten temples, differing sharply in design and construction, were erected. But Akhenaten's revolution was reversed soon after his death, with the traditional cults reinstated and the new temples dismantled.

Many of these foreign rulers funded and expanded temples to strengthen their claim to the kingship of Egypt. Temples focused more on popular religious activities such as oracles, animal cults , and prayer. In periods when Egypt dominated Nubia, Egyptian rulers also built temples there, as far south as Jebel Barkal. The temple axis might also be designed to align with locations of religious significance, such as the site of a neighboring temple or the rising place of the sun or particular stars.

The Great Temple of Abu Simbel , for instance, is aligned so that twice a year the rising sun illuminates the statues of the gods in its innermost room.

Most temples were aligned toward the Nile with an axis running roughly east—west. A further set of rituals followed the temple's completion, dedicating it to its patron god. These rites were conducted, at least in theory, by the king as part of his religious duties; indeed, in Egyptian belief all temple construction was symbolically his work.

Each stone was dressed to fit with its neighbors, producing cuboid blocks whose uneven shapes interlocked. In decorating these surfaces, reliefs were carved into the stone or, if the stone was of too poor quality to carve, a layer of plaster that covered the stone surface.

In the course of these additions, they frequently dismantled old temple buildings to use as fill for the interiors of new structures. On rare occasions this may have been because the old structures or their builders had become anathema, as with Akhenaten's temples, but in most cases the reason seems to have been convenience. Such expansion and dismantling could considerably distort the original temple plan, as happened at the enormous Precinct of Amun-Re at Karnak, which developed two intersecting axes and several satellite temples.

Cavetto cornices at the tops of walls, for instance, were made to imitate rows of palm fronds placed atop archaic walls, and the batter of exterior walls, while partly meant to ensure stability, was also a holdover from archaic building methods.

In the fully developed pattern used in the New Kingdom and later, the path used for festival processions—a broad avenue punctuated with large doors—served as this central axis. The path was intended primarily for the god's use when it traveled outside the sanctuary; on most occasions people used smaller side doors.

Beyond the temple building proper, the outer walls enclosed numerous satellite buildings. The entire area enclosed by these walls is sometimes called the temenos , the sacred precinct dedicated to the god. Many temples, known as hypogea , were cut entirely into living rock, as at Abu Simbel, or had rock-cut inner chambers with masonry courtyards and pylons, as at Wadi es-Sebua. They used much the same layout as free-standing temples but used excavated chambers rather than buildings as their inner rooms. 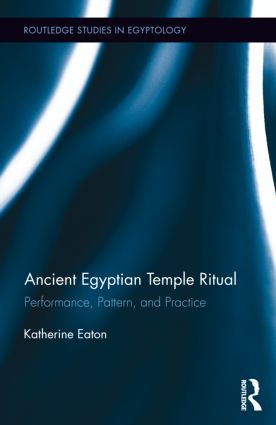 In some temples, like the mortuary temples at Deir el-Bahari , the processional path ran up a series of terraces rather than sitting on a single level. The Ptolemaic Temple of Kom Ombo was built with two main sanctuaries, producing two parallel axes that run the length of the building. The most idiosyncratic temple style was that of the Aten temples built by Akhenaten at el-Amarna , in which the axis passed through a series of entirely open courts filled with altars.

The processional way could therefore stand for the path of the sun traveling across the sky, and the sanctuary for the Duat where it was believed to set and to be reborn at night. The space outside the building was thus equated with the waters of chaos that lay outside the world, while the temple represented the order of the cosmos and the place where that order was continually renewed.

The sanctuary was the focus of temple ritual, the place where the divine presence manifested most strongly. The form in which it manifested itself varied. In Aten temples and traditional solar shrines , the object of ritual was the sun itself or a benben stone representing the sun, worshipped in a court open to the sky. When the main temple god was male, the secondary chapels were often dedicated to that god's mythological consort and child.

The secondary chapels in mortuary temples were devoted to gods associated with kingship.

Many of these rooms were used to store ceremonial equipment, ritual texts, or temple valuables; others had specific ritual functions. The room where offerings were given to the deity was often separate from the sanctuary itself, and in temples without a barque in the sanctuary, there was a separate shrine to store the barque. By the New Kingdom they typically lay directly in front of the sanctuary area.

The Temples of Ayocan. Magic in Ancient Egypt. Ancient Records of Egypt: The Nineteenth dynasty.

The Oxford History of Ancient Egypt. Recommend Documents. The Complete Temples of Ancient EgyptLike this document? If you continue browsing the site, you agree to the use of cookies on this website. It's well illustrated throughout with both photographs and drawings, and for any student of this fascinating subject, this would be a great addition to your library. The elevated terrace temple may represent the rwd-nTr-aA, the staircase of Osiris, with the related tomb symbolising the Osirian cave and the sacred grove which surrounded it, Harvey,p.

KEIKO from Lancaster
I do love sharing PDF docs utterly. Review my other posts. I have a variety of hobbies, like austus.
>